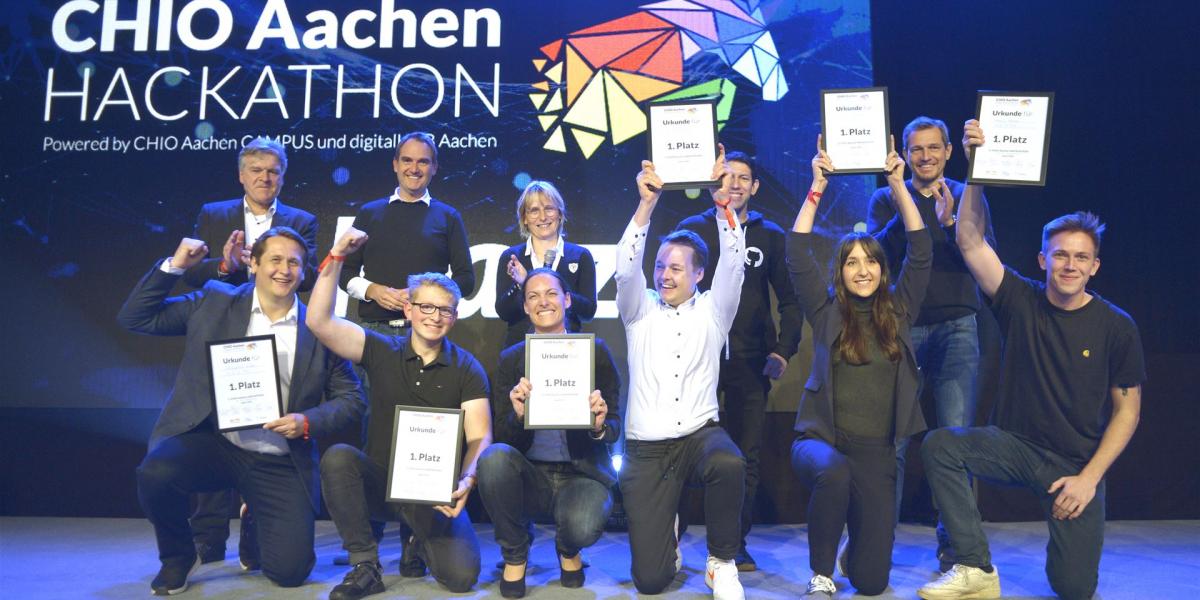 Laptops instead of obstacles, the sound of keyboards instead of hooves: The indoor school has been turned into a lounge, the creative atmosphere is accompanied by the beats of the DJ David Lulley. The first CHIO Aachen Hackathon “smart CHIO” in the Albert Vahle Arena at the showgrounds brought 60 creative minds from all over Germany together from Thursday to Saturday.

At the location where otherwise horses jump over courses or where the vaulting competitions are staged during the CHIO Aachen, minds were busy at work for three days and two nights. How can the “CHIO Aachen experience” be improved even further, how can the interactive participation of the public be further augmented, how can the sport be made more transparent, more entertaining, more comprehensible using cutting-edge technology – designers and programmers, athletes, marketing experts and creative minds from all sorts of persuasions searched for and found answers to these questions. The hackathon was organised by the CHIO Aachen CAMPUS and the digitalHub Aachen, supported by the official CHIO Aachen telecommunications service provider NetAachen.

It is like with a reality format on TV: A good idea is valuable, but doesn’t suffice alone. It also has to be sold. Every team had 5 minutes to convince the jury comprising of Hans-Heinrich Siemers (Senior Director Global Co-Innovation Labs Network SAP), Dr. Diego Assencio (Director of Solutions Engineering, South EMEA at GitHub), Dr. Oliver Grün (Chairman of digitalHUB Aachen e.V.) and Michael Mronz (General Manager of Aachener Reitturnier GmbH) and Conny Mütze (Authorised Signatory of Aachener Reitturnier GmbH) – in the course of an idea pitch.

Top idea and top pitch – Team “Pr3t A T0ut” impressed the jury with its idea to make details that are decisive in the dressage sport visible. With the aid of high-resolution cameras and algorithms, details like hoof prints during the piaffe can be visualised thus making the sport more comprehensible and entertaining for laymen – what’s more the technology enables the riders a precise analysis. Furthermore, first place was endowed with a 5000-Euro bons. “A super idea, which can also be put into practice fast, because it can be integrated into our existing developments,” Michael Mronz stated. Moreover, it is also an idea that can be implemented beyond the field of equestrian sport: “In the scope of the CHIO Aachen CAMPUS, we have also created an offer for hobby riders – for example in future the participants can also take part in a training day here at our grounds and return home with the added value of a digital evaluation,” added Mronz. In addition to the high degree of innovation, Oliver Grün above all praised the fact “that I as a layman can now also understand, what is happening there”.

The team members Daniel Barofke and Lennart Carstens-Behrens travelled to Aachen from Leipzig. “I have been riding for an eternity,” Daniel noted. He has close ties to the sport; whereas his mate Lennart doesn’t have a clue about the equestrian sport. He is a computer scientist, at the CHIO Aachen Hackathon they both joined forces with Maike Holtkemper, Henric Breuer – the latter received extra praise from the jury for their acting talents during the pitch which they presented in the form of a dialogue – Krzysztof Zibur and Sinem Atilgan, to develop joint ideas which make dressage more transparent and entertaining through the use of technology. “Technology can help explain why one piaffe was better than the other,” Daniel is convinced. The team is incredibly proud and pleased Maike Holtkemper said, who is above all delighted that she “will soon be able to take her husband with her to the CHIO – since now he will also be able to understand the dressage.”

10 teams presented their ideas and solutions for the CHIO Aachen, “we enjoyed exciting days with outstanding, innovative solutions,” commented Michael Mronz, who is already looking forward to the second hackathon next year.